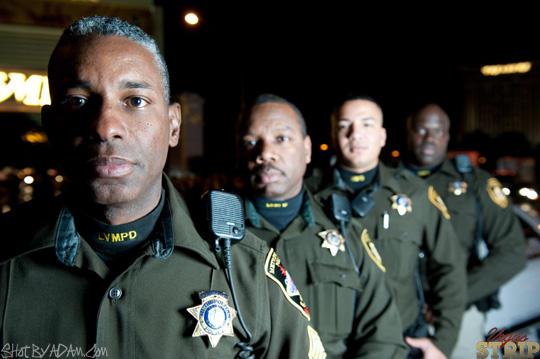 In my over 15 years of being a professional photographer I’ve participated in some pretty crazy shoots. I’ve shot flash mobs in a mall, a wedding where a giant pig was part of the wedding procession, and once I did a seven-hour shoot of Lamborghini up in the mountains, during the middle of winter, at night, with no light. I’ve taken photos under gunfire, on top of sky scrapers, under water, you name it! I’ve done some of the craziest photo shoots you could imagine, but nothing prepared me for the two nights I shot stills for the television show, Vegas Strip, as seen on the TruTV network. Shooting cops on the Vegas Strip...with my camera. Las Vegas Metropolitan Police cars atop the Convention Center Area Command. A view of The Strip most people seldom see!

Vegas Strip is a spinoff of the show Cops, which is produced by the same company, Langley Productions. In the two nights I shot for Vegas Strip, I participated with a variety of different police officers with the arrests of two Jay Walkers and a burglary suspect, mounted police on horseback, the assistance of a homeless man who was suffering from alcohol poisoning from drinking an entire bottle of Lysterine, and the arrest of over a dozen prostitutes from just one Las Vegas hotel property. I was told it was a rather slow shoot by comparison to some of their others. 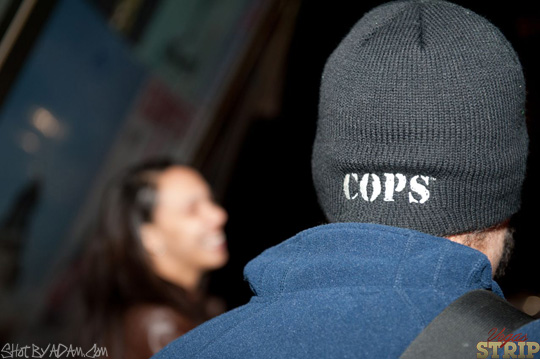 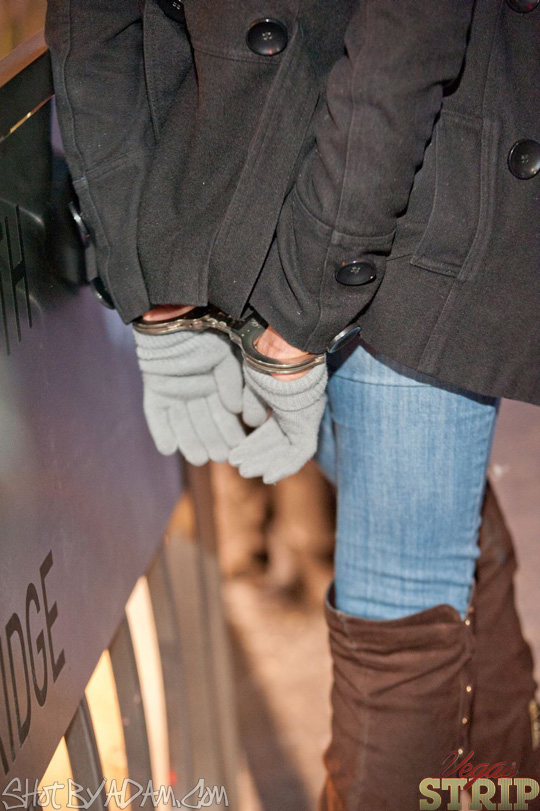 Some of these girls may like handcuffs in the bedroom while some of them have to wear them on the street.

But aside from all the excitement, adrenalin, and notoriety these men and women in uniform receive from their job, deep down you can tell they really enjoy what they do. Walking the beat on the Las Vegas Strip, they are truly ambassadors of our city. When they aren’t breaking up a fight of drunken party-goers, they take pride in keeping Las Vegas safe and enjoy representing one of the coolest cities in the world.

Keeping control on the Strip in Las Vegas, the Mounted Police take great pride in their city and in the show Vegas Strip.

Officer Haynes, an ex-UFC fighter, takes great pride in being a police officer. He is often recognized for his MMA fighting appearances but now he's known for representing Vegas' Finest!

Las Vegas police deal with situations you don't see anywhere else in the world. Here a local "Elvis" has fun with Metro

Some of these police officers have gotten some celebrity status from their appearances on the Vegas Strip show, including Sergeant Tom Jenkins. Walking around, taking photos with him, I was quite surprised at how many people on the Strip recognized him from the show. I spent a lot of hours with the different officers and I found it interesting as to what their motivations were for being on television. Oddly enough, it wasn’t the fame or fortune. In fact, while it was fun sometimes to get noticed, many of these officers weren’t seeing themselves as celebrities and they certainly didn’t didn’t do it for the pay. In fact, none of these officers receive any extra pay or commendations for being on the show! 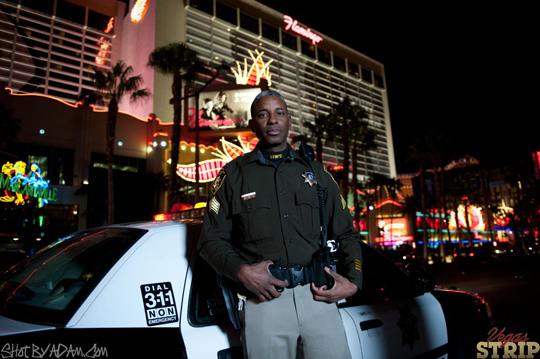 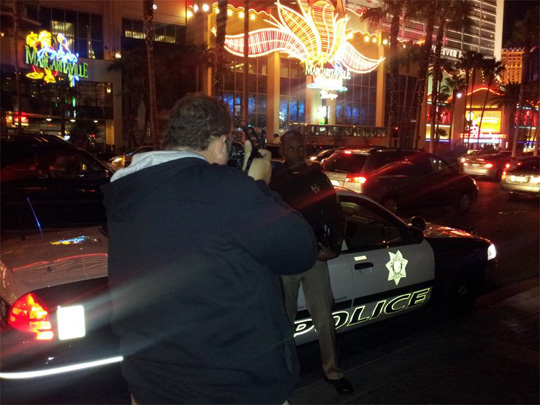 Shooting Sgt. Jenkins...with my Nikon and lighting gear. We actually had to block pedestrian traffic for a few minutes while I got these shots. Everyone was more than happy to cooperate though knowing we were shooting for the show Vegas Strip. Still though, it was pretty damn cool! 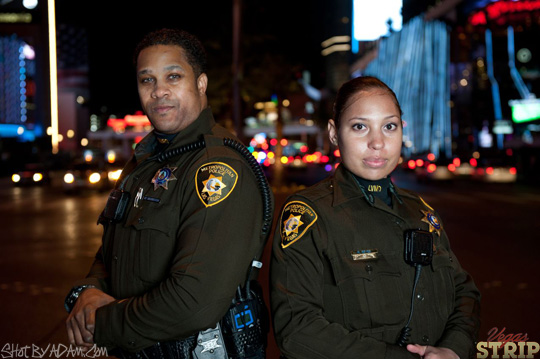 Vice officers Wandick and Reyes pose on the Strip. If you're a prostitute in Las Vegas you will no doubt know these two very well!

So why would they do it? Oddly enough, it’s the same reason the different police departments around the country love to participate with the show COPS…for the positive PR. “Us being on this show really does help our image a lot” one officer told me. “I’m sure it helps with recruitment but more importantly, people see what we do, understand that being a police officer isn’t always fun and games. But that all aside, let’s face it, Vegas is Vegas…we deal with situations here that just don’t exist anywhere else in the world and on that level, what better place to be a cop or to shoot a show like this!” So very true. 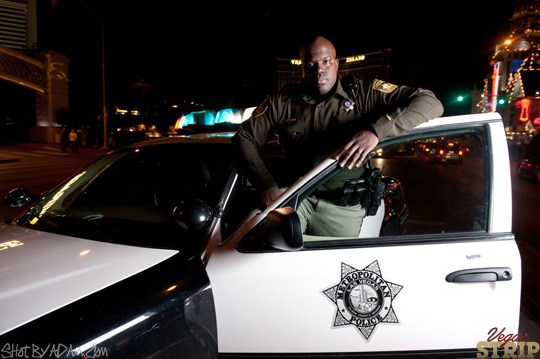 "I only have two faces...jolly and mean. I guess I'll use the mean face for these photos" says Officer Albert Reeder. Shot in front of the Mriage.

I’ve lived in Las Vegas my entire life. I grew up the son of a 30+ year veteran of the casino industry during the 70s and 80s and I thought I’ve heard a lot of stories and seen a lot of weird things. My 48 hours of shooting with the awesome production team and officers that participate with Vegas Strip really opened my eyes to an entirely new level of the heartbeat of Las Vegas. I’m already looking forward to my next shoot with these fine men and women of the Las Vegas Metropolitan Police Department! Vegas Strip can be seen on the TruTV network, photographs to be seen in the near future on the Vegas Strip page on TruTV.com. 5 comments on “Shooting Cops On The Las Vegas Strip”